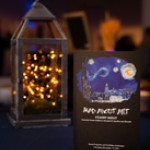 “Mad About Art” is the annual fundraiser for Fountain House Gallery. This art auction and benefit raises money for the artists’ gallery and studio space. The theme for this year’s event, held on November 17 at Metropolitan West, was Van Gogh’s The Starry Night (1889).

Regardless of whether The Starry Night is a painted representation of a hallucination Van Gogh was experiencing leading up to his breakdown, for the mental health community the piece is more important as a representation of triumph in the face of a debilitating mental illness. Artists with mental illness can still make art, and great art at that, which surprises the world in new and wonderful ways. Welcome to the artists of Fountain House Gallery! On the night of the benefit, these artists did just that—surprised and delighted the packed crowd with their visions of the world.

Artist Jonathan Glass, one of the most ubiquitous and successful artists of the Gallery, delivered a rousing speech that opened up some of the more unknown aspects of Van Gogh’s life, his art and struggle with mental illness, which Jon then used as an analogy to his own life—his struggles and his successes. He was emphatic in telling the attendees just how much Fountain House had changed his life by giving him “the structure to be a better artist.”

Jonathan Glass speaks to the guests

Ariel Willmott, director of Fountain House Gallery, led a pledge drive to raise funds to support a recently-leased studio space for the artists. One person started by giving a donation of $10,000 to be matched. In response, hands went up all over the room from people wanting to give. The pledge drive was an unqualified success.

The Mad About Art crowd

An important part of the benefit was the recognition of individuals who have contributed greatly toward the flourishing and success of Fountain House Gallery. This year’s two recipients of the Esther Montanez Leadership Award were Lawrence Benenson and Phong Bui. Benenson regaled the crowd with quips and aphorisms on the importance of Fountain House and its mission: “Fountain House is a shining example of grassroots community building… Fountain House lets members be who they wanted to be.”

Bui spoke at length about his life and personal observations on art and mental health, and the links he considers to exist between the two. His process of coming to understand what mental illness is and his response to this knowledge by incorporating it into his life of art was a challenge to everyone not only to become educated about mental health but also to take action. As a further comment on the popular belief about the connection between art and mental illness, Bui finished his speech by saying, “An artist who has not had a nervous breakdown cannot be trusted.”

Last year’s recipient of the Award, Francis Greenburger, was on hand. He spoke with me about the experience of buying his first painting at the age of 14. He explained how he initially discovered our organization through a member of Fountain House who worked in his office and encouraged him to learn more about us. Founder of the Greenburger Center for Social and Criminal Justice, he is an individual on a mission—he loves “enabling people with challenges to succeed despite those challenges.” As he explained, “People who are under-resourced don’t feel they have the economic parity they need in order to thrive in the community.” When asked what was it that he wanted to see change in our society, he responded without hesitation: “for mental illness to no longer be a crime in America.”

Since the theme of the event was The Starry Night, a number of the artists created their own interpretations of Van Gogh’s painting. One exhibit wall was dedicated to the different versions made for the evening. Gallery artist Alyson Vega’s depiction, New York Starry Night (2016), was featured on the invitation and on the cover of the exhibition catalogue. However, hers was not the only compelling expression of Van Gogh, with many pieces portraying unique and beautiful images that even included renderings of the circumstances of Van Gogh’s making of the original piece. Apart from the Van Gogh “wall,” numerous pieces depicting varied subject matter in a host of mediums were arrayed around the space.

At the beginning of the evening, the walls had been filled with works by the artists of Fountain House Gallery. After the bidding ended at 9:00 (with some people bidding right up until the finish), large swaths of the walls were emptied of their pieces. This year’s “Mad About Art” was a triumph – artistically and financially!