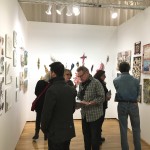 We were delighted to present works by Fountain House Gallery artists at the recent Outsider Art Fair, and to join in celebrating the 25th Anniversary of this international art event. Our gallery has had a presence at the Fair for many years, and this year’s incarnation, held at the Metropolitan Pavilion on West 18th Street, drew a wide audience of art lovers, many of whom consider this a “must-see” on the calendar of annual art-world happenings.

What is “Outsider Art”? In the 1940s, the French artist and curator Jean Dubuffet coined the term Art Brut (“Raw Art”) to describe “works produced by persons unscathed by artistic culture, where mimicry plays little or no part (contrary to the activities of intellectuals). These artists derive everything...from their own depths, and not from the conventions of classical or fashionable art." The English art critic Roger Cardinal, a champion of Art Brut, called it “Outsider Art” in his 1972 book on the genre. The term stuck.

Angela Rogers with her “Poppets”

The Trinity by Angela Rogers

About the artists and their work: The late Anthony Ballard, known for his precise pen-and-ink drawings of erotic subjects and geometrics, has garnered significant critical attention in recent years; Mercedes Kelly’s fanciful depictions of canine and feline subjects have been a crowd-pleasing fixture at the Fair over many seasons; Lawrence Pujol’s refreshing country landscapes are becoming increasingly popular with collectors; Angela Rogers’s “poppets” – ­ magical assemblages wrapped in brightly-hued yarn – incorporate intriguing mystical symbolism; Robin Taylor’s “Jenny” paintings affectingly portray a young girl so bashful that her face is represented as a mop of bright orange hair; Alyson Vega’s intricate fiber works, shown to great acclaim in a 2016 solo exhibition at the prestigious venue White Columns, surprise and enchant.

Our booth buzzed with activity from day one of the Fair’s long weekend, and a number of collectors departed the Metropolitan Pavilion having purchased an original piece of Fountain House Gallery art. “Selling” is gratifying indeed, but perhaps the greatest pleasure derived from our participation in the Fair is that of presenting works by Fountain House Gallery artists on a world stage: In addition to exhibitors from across the United States and Canada, galleries from countries including Austria, France, Italy, the United Kingdom, Haiti, and Japan participated in the Fair.

The interest sparked by the presence of so many exhibitors under one roof accrues to the Gallery’s benefit. Art critics, curators, and museum folk are among the Fair’s attendees, and we often have an opportunity to fill them in on key features of an artist’s work process and history. The forging of such relationships is invaluable in­­­­­­­ promoting artists’ work beyond our walls, and Gallery Director Ariel Willmott remains ever on the lookout for fresh pathways to the larger art world. Stay tuned.