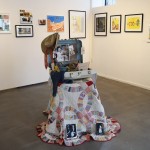 Fountain House Gallery attracted a large and enthusiastic crowd for the September 13 opening reception for its first exhibition of the fall season: Domicile. This group show, encompassing dozens of striking pieces, examines our relationship to interior spaces and domestic objects.

Domicile has been organized by Audra Lambert, an independent curator. Said Lambert, “It has been an honor to work with Fountain House Gallery on Domicile.It has been especially rewarding to review the fantastic collection of artworks that Fountain House community artists have set forth, as well as to include works by a range of artistic voices including artists Camille Eskell, Olivia Jane Huffman, and Maxwell McInnis. I have long admired Fountain House Gallery's brave approach to supporting contemporary art and experimentation, and it has been gratifying to curate this incredible survey reflecting on the space that matters most to us in reality and in memory, in fact, and in the fictions we create: that ubiquitous, universal space of Home.”

Domicile is a contemporary survey of painting, sculpture, photography and mixed-media works engaging with our intrinsic, insistent relationship to the idea of Home. Seen here through the lens of artist Alyson Vega's mixed-media compositions and the hybridized furniture-as-art-objects of Maxwell McInnis, among others, Domicile creates a space where longing and inquiry combine. Materials evoking domestic spaces, such as fabric and wooden surfaces, combine with photographs and paintings of more traditional interior views reflecting the crucial roles that homes play in our everyday lives. The simulated and the real also share space in Domicile, where an interior tableau invites the public to re-imagine the Fountain House Gallery space as a playful intrusion of private space into the public domain.

Domicile will remain on view through October 24.