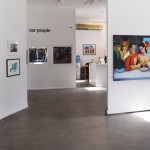 What is the meaning of “community” in a time of deep division? Fountain House Gallery artists were asked to reflect upon this question in preparing pieces for the exhibition Our People. The resulting works, which reflect a spectrum from optimism and hope to disunity and chaos, premiered at a Reception at the Gallery on March 7, 2019.

The show’s curator, Ruth Adams, along with a packed house of artists and guests, was on hand at the reception. Ruth is Executive Director of Art Omi, a not-for-profit arts center located in Ghent, NY. Commenting on individual works in Our People, Ruth said, “Included are representations of specific communities such as the women’s march in ‘Girls Stronger Together’ by Alyson Vega and an underground metal music community in ‘NYC Music Scene II’ by Ariella Kadosh, alongside others that appear wholly personal. Some pieces strike me as universal. I like the idea of community as personal and intimate as well as a big picture of the time.”

Ruth further noted, “Issa Ibrahim’s ‘Super Supper’ derives from an image that is ingrained in our psyche from art history and Christianity. In this piece, superheroes are caught and entangled with each other in a drama, and their humanity and struggle bring us into the context of these fantasy/religious archetypes. Building community is an act of transformation as we gather individuals to create a whole, as seen in the sea of faces or buildings in ‘New York City Democracy’ by Mercedes Kelly or in ‘People in Buildings’ by Roger Jones. Even in the more abstracted images we experience emotional states that are common shared reactions to the times. We’re seeing ourselves and each other.”

Artist Issa Ibrahim in front of his mural Super Supper

My Neighborhood by Aracelis Rivera

This thoughtful and throught-provoking show will remain on view at Fountain House Gallery through April 17, 2019.