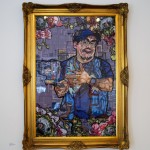 Fountain House Gallery’s summer exhibition, The Flaneur, opened with a reception on Thursday, June 20th. This group show features works by 27 Gallery artists and spotlights a variety of art mediums.

If you are not familiar with the French word “flâneur”: The word describes a person who idles or strolls around, often with the implication of wasting time — and has appeared in discussions on contemporary art since the 19th century, perhaps first in Charles Baudelaire’s historic 1863 essay, The Painter of Modern Life. In that text, Baudelaire was considering the artists of his day — Manet, Degas, Monet, and Renoir among them — and their paintings of Parisian life, in which people are shown walking around, lounging in cafés, parks, and nightclubs, and taking in the cityscape. However, rather than describing his flâneur as lazy or indifferent to their surroundings, Baudelaire instead celebrates the flâneur as the “passionate spectator” of contemporary urban life.

For this exhibition,Fountain House Gallery artists were asked to inhabit the role of flâneur themselves, reflecting on the bustle and diversity of city life as only artists can. Adam Yokell, curator of The Flaneur,was on hand at the reception and was much sought after by guests and artists seeking his insights about the show and its theme. Adam is the founder of Foundwork, a new online platform connecting artists and collaborators across the global art community.

Commenting on individual works in the show, Adam said, “In this exhibition we see a wide range of subjects, both real and imagined, for instance Jayce Kim’s Sitting at the Rock and Roll Café and The Wanderer, where the artist playfully sketches people observed around town who may, incidentally, be flâneurs in their own right. Or Susan Baus’s Endangered Species, where the artist creates a scanned object collage of a Lower East Side tenement flanked by luxury developments in a comment on gentrification. We’re also presenting work that’s more fantastical, such as Issa Ibrahim’s Dad Blast!, where a caped, masked man stands at the edge of a rooftop, smiling at us as he decides whether to fly (or jump?) from the ledge. And Roger Jones’s Love 90 People and Love Houses and People, where he draws a dense mesh of people and buildings like wallpaper across the composition. Throughout, we see a sharing of space and time, the defining condition of city living.”

The Wanderer by Jayce Kim

The Flaneur will remain on view at Fountain House Gallery through August 7th. Stay tuned for news of the September opening of our first show of the new fall season.