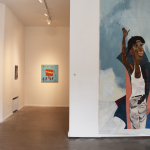 Fountain House Gallery’s first exhibition of the new season is Heavy Sauce, which opened with a Reception on Thursday, September 12. This group show features works in mediums including acrylic, mixed media, collage, and fabric.

For this show, Fountain House Gallery artists were presented with a quotation by the artist Lee Lozano (1930–1999) as a starting point for a discussion about the physical, psychological, and sociological nature of New York City. In her NYC 1960s notebook, Lozano wrote: “Every day thousands of pounds of paint are applied to buildings in NYC, signs, benches, etc., which can only mean that the city is getting heavier and heavier.”

Heavy Sauce is curated by artist Gerasimos Floratos, who grew up just a stone’s throw from Fountain House Gallery and continues to live and work in the neighborhood. Gerasimos said, “Over the years, I have closely followed the Fountain House Gallery program, and the Gallery’s artists and their artworks remain a source of inspiration to me. Before I selected the work for Heavy Sauce, Fountain House Gallery kindly invited me to become acquainted with their community of artists. What I learned from the artists is that we all have unique perceptions of our city and that as locals we are all a part of the ongoing tapestry of its history.”

This show has an overall “look” that differs from that of prior exhibitions at the Gallery. Our group shows often feature works ranging in number from 30 to as many as 60. In contrast, Heavy Sauce spotlights 12 works by eight Gallery artists: Maybellene Gonzalez, Issa Ibrahim, Mercedes Kelly, Gary Peabody, Aracelis Rivera, Barry Senft, Susan Spangenberg, and Alyson Vega. Allowing substantial “breathing room” for a select number of pieces was key to Gerasimos’s concept for the show, and it allows viewers to appreciate the work in a more focused manner. In addition to the pieces made by Gallery artists, a witty sculpture created by Gerasimos is displayed on a pedestal.

Commenting on specific works in the show, Gerasimos said, ”In ‘Subway Trainman,’ Alyson Vega has fastidiously stitched together scraps from her everyday life to produce her vision of a dense and emotionally complex metropolis. In Susan Spangenberg’s ‘Homeboy,’ an unstretched canvas towers over the viewer at 12 feet tall, standing as a homage to the artist’s twin brother, who died tragically of a drug overdose. Using a casual and loose application of paint to depict figures and text calling for support of the community’s homeless population, Mercedes Kelly’s direct yet emotionally affecting work ‘Homeless Housing Now!’ blurs the line between a painting about local life and a protest sign demanding human rights for the oppressed of our society.”

Heavy Sauce will remain on view through October 23.